The hazard and risk of flooding by the Drina, Krizevica and Glogovska rivers in the project area in the municipality of Bratunac was assessed as high and extremely high according to the Flood Hazard Maps and hydraulic analyses (Figure 1).

The municipality of Bratunac has potential for further urban expansion and increase of economic and urban activity in the mapped flood area, especially after the completion of the new bridge and border crossing with the Republic of Serbia (the Bratoljub Bridge). Therefore, it is necessary to launch targeted and extremely challenging measures to reduce the risk of floods and implement measures to control flood flows. This will allow planned expansion of urban and economic areas and also protect population and their material goods from floods both in existing urban and the planned areas.

Respecting the general observations and guidelines from the flood map project in B&H, and on the basis of the Terms of Reference, we developed the Preliminary Design and subsequently the Detailed Design of the flow regime control and improvement of the river channels of the Drina, Krizevica and Glogovska rivers. This design defined the basic technical parameters of the following:

All technical parameters were determined on the basis of previous hydrological, geodetic, geological-geotechnical, erosion, sediment and other surveys (Figures 2-9): 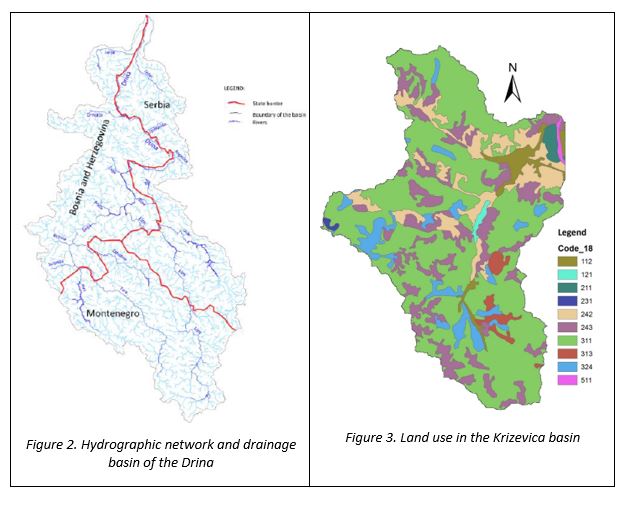 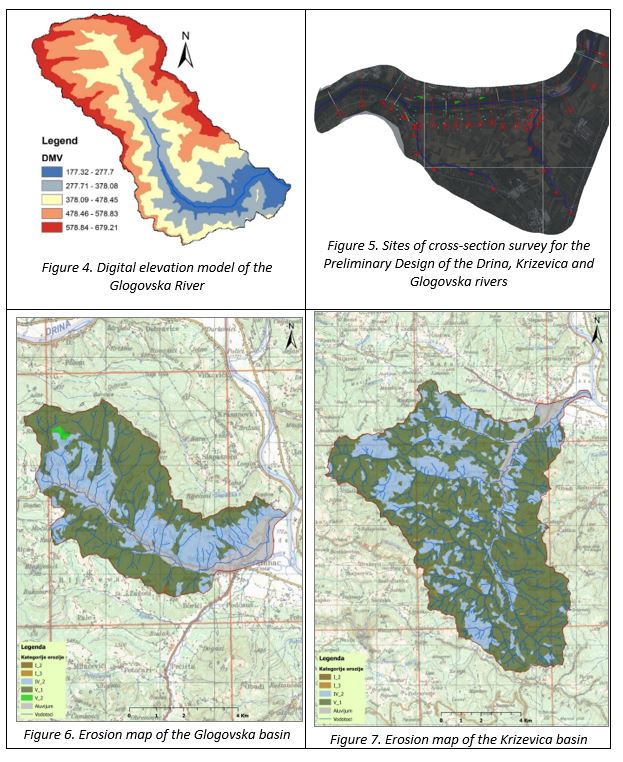 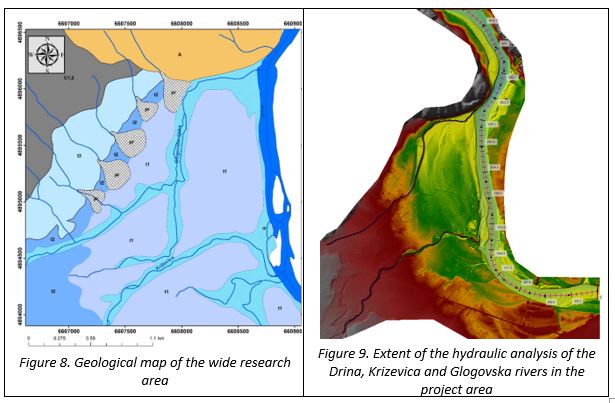 The Preliminary Design provides an integrated technical solution for the flow regime control of the Drina, Krizevica and Glogovska rivers downstream from the intersection with the Skelani-Bratunac-Zvornik regional road. It also provides systematic measures for flood protection, reconstruction and rehabilitation measures for flood protection facilities, planning measures and guidelines aimed at increasing the effectiveness of flood protection in wide urban area of the municipality of Bratunac. All of these solutions and measures are informed on previous hydraulic simulations and analysis of 2D models of unsteady flow in the project area, Figures 10-11 (the current state), and Figures 12-13 (the state of controlled flow regimes) in the area of the future ‘Bratunac’ protected polder. 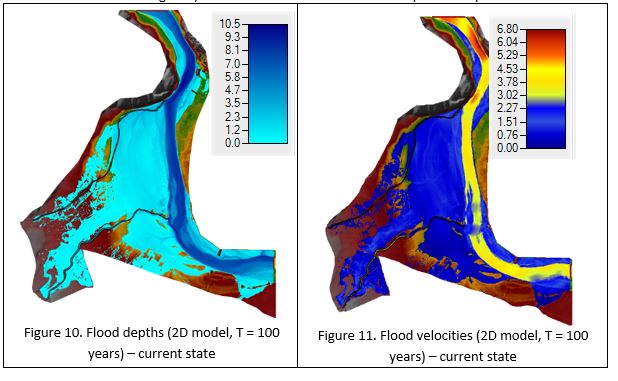 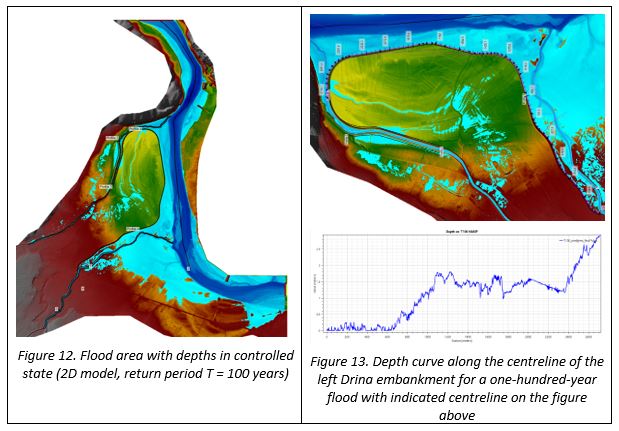 The Preliminary Design elaborates technical solution and a concept of protection against flooding of the Drina, Krizevica and Glogovska rivers:

The basic factors for selecting optimum embankment route are:

Option 3 was selected as optimum after detailed analysis of criteria (Figures 14-15).

The Krizevica River:
Possibilities of different options for the route of the regulated main river channel of the Krizevica are limited along the entire length of the project area by:

The river training works include a 857m section of the main river channel from the end of the existing regulated section downstream to the confluence with the Drina.  The radii of curvature are between 100 and 220m. At the downstream end of the regulated channel section, it is planned to line the streambed and channel slopes around the confluence of the Krizevica and the Drina, as well as to level off the bar in the Drina (along approximately 100m with 40m width at the bottom), which prevents the interbasin transfer of water (Figure 16).

The Glogovska River:
The river training works of the Glogovska River will follow the existing river channel as much as possible to minimize permanent earthworks and optimize land compulsory purchase required for a corridor mainly located within the public water body. Given that the corridor for the construction works is bordered by the designed left Drina embankment on the right and the Bratunac-Zvorink regional road on the left, possibilities of the route of the regulated river channel along the entire project area are limited to only one option.

The Drina embankment
The embankment on the left Drina bank (2.13km long) has trapezoidal cross-section and is 5m wide at the crest (Figure 18).

The slopes on both landward and riverward sides are 1:2.5. A 4m wide clay gravel service road is designed along the crest of the embankment (30cm thick road surface). The embankment slopes and a part of the crest (2 x 50cm) are covered with topsoil. The embankment crest is designed with 80cm freeboard above the level of a one-hundred-year flood in regulated state.

The Glogovska River
The Option I was selected: regulated river channel with a base 3m wide and 1:2 slopes. Longitudinal reinforced concrete stabilizers, measuring 40x110 cm, are used to stabilize the streambed and slopes of the regulated channel. The longitudinal stabilizers are placed vertically on both sides of the river channel, with their crown raised by 50cm above the bottom of the streambed. The channel slope lining connects to the the crown of RC longitudinal stabilizers. The channel is lined with concrete hexagonal prisms with 20cm sides and a thickness of 15cm, and laid up to a height of 1m from the crown of the longitudinal RC stabilizers, finishing with the final RC beam measuring 30 x 40cm (Figure 19).

Under longitudinal stabilizers, lining of reinforced concrete slabs and the final beam, there is a 10cm base layer made with gravel of maximum 1cm grain size. In order to prevent suffosion behind the river channel, geotextile with a mass of 300gr/m2 is installed on the previously prepared base under the gravel layer along the entire section of river training works.

Option II: regulated river channel has isosceles trapezoidal cross-section, with a base 7.50m wide and 1:2 slopes. Mechanically placed riprap is used for the stabilization of the streambed (1m thickness, stone size dsr=50-60cm). The final layer of stones is layed into 30cm layer of MB20 concrete and grouted. Slopes are stabilized to 1.50m height from the streambed, using mechanically and manually placed layer of stones of dsr=30-40cm size. The final layer of the slopes is a 30cm layer of stones additionally processed at the riverward side, manually placed and fitted so that after pouring MB30 concrete the absolute roughness does not exceed 5cm.

In addition to the works in the main river channel, it is planned to construct an embankment on the left bank of the Krizevica, with a 80cm freeboard above the design flood flow of the Krizevica (T=100 years return period) in the regulated state.

Protection of the right Drina bank
Two types of cross-sections are analysed to protect the left bank of the Drina River and the future embankment from potential bank erosion. Both types are variations of the continuous bank revetments made with crushed stone with a toe in the excavation. Figure 20 shows the selected option.

The selected option involves a construction of crushed stone revetment. The final layer is a 30cm layer of manually placed and fitted stone, additionally processed at the riverward side. This design also planned a 10m wide area which will be used for recreation and leisure activities (Figure 21).

Depending on the receiving water body, the 73ha area is divided into the East and West drainage subsystems. The technical solution for the drainage of internal waters of the future protected polder includes the construction of main drainage structures along the designed embankments, as follows: